Tigernut milk the whole year over

Tigernut milk has become a part of our Mediterranean diet. You drink it the whole year over, because she is tasty and healthy. Until the 80s drinking tigernut milk was the most important part of a walk. Or as a complement to a good movie at the Ideal cinema, which has disappeared of the neighborhood, but not of our minds. Movie, news, movie. That was fun! To hang around the cinema for hours and hours!

The oldest neighbors explain that for decades children and adults wanted to go out just to drink tigernut milk at Tio Che even though they had to conform to a small ice cream sandwich instead. These were the days of the grey neighborhood, the chimneys, with the back to the sea, with a lot of work and not much fun. 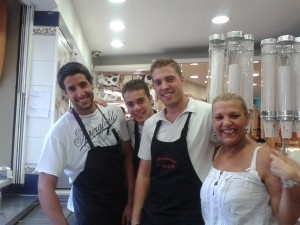 Tigernut milk is a lot more than just a glass of white liquid; it is the Mediterranean, the culture, childhood reminder, and the taste you are used to. If it was not like that, how could you explain that El Tio Che and tigernut milk have met 100 years ago and have never left each other. Their love was so big that it infused the whole neighborhood of Poblenou. Who would miss coming to the horchateria to get a tigernut milk, even if it was just to exchange a smile?

Imagine how old the tigernut is that she was already known in the times of Tutankhamen, of the Iberians and the Arabs, who have converted it into a tasty drink that should be praised and mentioned as it is healthy, nutritive and delicious. Good horchata (tigernut milk) with a lot of nutritional value is perishable and can only be drunk for maximum two days after being produced, because she is natural, without preservatives and pure. You should distinguish it from others which are artificial and get freeze-dry, pasteurized and canned. This is why there are not many horchaterias in Barcelona, because the product requires an almost immediate production and consumption, so as to maintain the taste, the quality and the freshness.

The tigernut had always been a delicacy for the kings in Spain, it had been much appreciated by the nobility according to Enrique de Vilena in his book Art Ciso, and it was sent from Valencia to the Castilian court where she was considered an exquisite food, even though for the Arabs it was food for the poor. They used it for cakes and sweets and to replace almonds.

In the 17. Century the tigernut came from Valencia to Madrid and so the horchata became the best drink to withstand even the toughest heat. The horchata was together with barley water one of the most popular drinks as Marc Antoni d’Orellana said, also known as the savant Orellana: “Since a few years some people from Valencia have been selling here and in Madrid during the summer barley water with tigernut milk, sometimes with ice or just the tigernut.”

It looks like tigernut milk came into existence after barley water and then overcame the water, because it is a delicacy of a unique and sophisticated taste that we consider at Tio Che a cult drink. The fascination of horchata (tigernut milk) as a drink was so remarkable that the former “aiguaderies” from Valencia were replaced by the “horchateries” which exist alongside the “gelateries” even these days. The “aiguadores” sold tigernut milk on the streets with their carts loaded with ice, exactly as the horchateros did with their peculiar fridge, which was also done in the 20th century. Our uncle Tio Che was the best example for this, when he called 1912 at the people:  “He, you, try this” with his decanter of cold horchata in the streets of Borne. This way the first horchateros of Valencia made the whole of Spain try the unique taste of the tigernut milk.