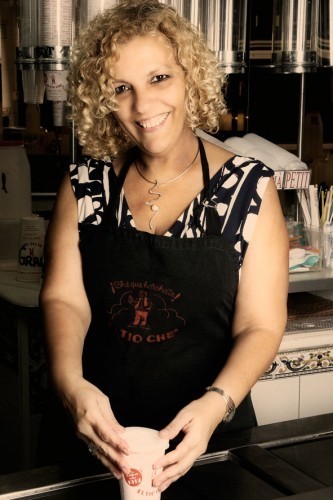 A long time ago, somebody said that one could best enjoy a sunny day by drinking tigernut milk and sitting with a good friend at the terrace of El Tio Che in Poblenou. This seems to be true, if you consider how many visitors come to have a drink with us, on this centruy old corner of the Rambla 46 in one of the most attractive neighborhoods in Barcelona.

The magic round square of Poblenou maintains, duplicates and makes its characteristic stand out to attract many neighbors over generations, alongside the tourists and travelers, who jump into the sea because it is quite close, as well as a lot of young couples who chose Poblenou to raise their children. We could add to this list of beneficial aspects many more, but one thing is clear, the corner of El Tío Ché is the main meeting point of the neighborhood. Everybody meets here, the loving ones, people exchange the quick chats because my oven is on, the latest news, the neighborhood projects, well, as we say, everything happens here. And while all of this happens, you enjoy a tasty iced lemonade, an ice-cream, a tigernut milk, a cold cinnamon– and lemon – flavored drink and sandwiches made with the same dedication as on the first day, and which anyone remembers who has ever tried them. But not only do these tastes bewitch our senses, but also the aroma of chocolate, which enters our nostrils from November till March. At first the turrones (Turkish honey) bewitch us, yes, of course…Turrones that are elaborated manually with asymmetrical forms and handwritten letters, yes, you can tell that they are 100 % handmade.

Why should anyone use machines, when you can delight yourself by the sight of the turrones coming out of the kitchen, each one being different for the other, of course because that depends on so many things and we are different every day.

Alfonso, María, Pepe were born here, Teresa came afterwards and then the girls Natalia Irene and now also the youngest one, Cristina. Three generations lived here; the first one did not get to know the neighborhood. They got stuck in the Barceloneta and became famous. Always with the same activity: the elaboration of tigernut milk, as any good person from Alicante should do back then.

It is worthwhile to get to know the sweetest corner of Poblenou and their friendly people, to try all tastes, the new and the traditional ones and to simply enjoy yourself!