“We try to innovate, but it is usually the classic that wins” 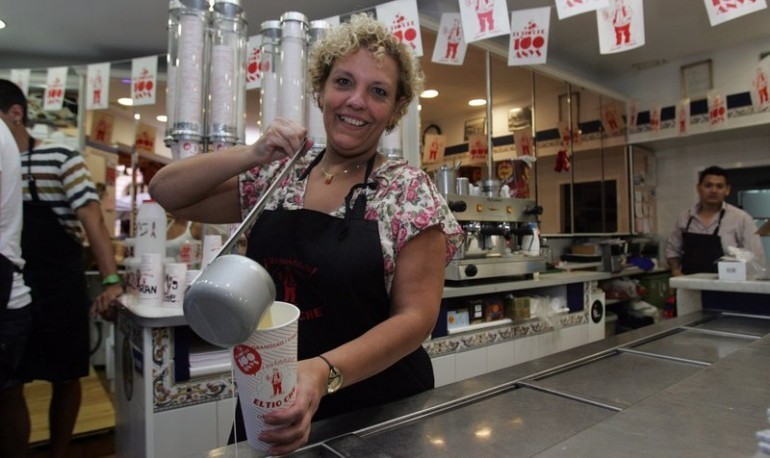 With the current crisis to achieve that a business remains for a century is a heroic feat. What is the secret of El Tio Che?

It is basically to create a good product and to take good care of the raw material. We also try to serve with friendliness and care, an attitude that people always appreciate. Of course, the most important aspect is the raw material, otherwise people would not come. No matter how nice you are, if you do not deliver a worth-while product the client would not like it.

The horchata (tigernut milk) remains you flagship?
It is the star of our products. One of the secrets is to use tigernuts from a certain region, but also to calculate well the proportions of water and sugar.
As far as ice-cream is related, should we respect the tradition or innovate a little bit?
In our case we try to innovate, but the classic always wins. You can do more or less peculiar mixes, but people always end up asking for the more traditional tastes, like vanilla, chocolate, lemon, xixona…
El Tio Che is a family business, do you already have the succesor?
Right now our sons are working at the workshop and so, the fifth generation of the family business is under way. There is also a granddaughter of a year and a half who is walking around and starts mixing the tigernuts with water. We are not worried about succession.

The whole business started at the Barceloneta and moved to the Poblenou. Is it impossible to think of it outside of the Rambla?
Who knows?Maybe if we had established our business somewhere else it now would be known for having housed El Tio Che (she laughs). But right now it is true that the Rambla del Poblenou and our ice-cream parlor are somehow associated, we have established a strong relationship with the neighborhood and the inhabitants.

Is it possible to serve other ice-cream parlors or to have an industrial production?
We have a small workshop and to undertake such a step would mean a lot of work and we are the ones that we are. To expand the machinery or the ice-cream parlor to be able to do such a production would make us loose the craftsmanship touch of our products and that is why we do not want to go into that direction. Also, we do not need to do so.

Do many tourists come?
Quite a few do, especially those who are in the hotels nearby. It is funny, because they see people queuing, so they also stand in line and many ask for batuts (a type of bun). And then I offer them horchata (tigernut milk) or leche merengada (milkshake with cinnamon, egg and lemon), so that they can taste it. And if you give them on top of that a scoop of ice-cream they are dazzled and come again every day.